So my birthday was last Wednesday, which is why I haven’t posted. Then, on Saturday, we had my birthday party which was a Water Gun with a Jello Shot Easter Egg Hunt.

A few things that I learned about

The Art of War:

So my birthday is 4-20, because Sarah had a Roller Derby bout the weekend before, we decided to throw the party the weekend after. Which turned out to be a really great idea since tornadoes hit Raleigh the night of April 16th. Throwing it Easter Weekend, obviously necessitated at least a nod to the religious Holiday. How to do so in a way that’s not too offensive but fun and ridiculous?

I waited too long to buy the Easter Eggs, so I purchased them for half off at K-Mart. So I got 63 Easter Eggs for $3. This was too few, because of a Roller Derby Girl (You know who you are!)

I used the recipe from Drinkstreet.com

Mix the jello mix with the boiling water until the powder is fully dissolved and add the cold water and alcohol. Pour the cooling mixture into either shot glasses or paper cups. Shot glasses are more attractive, but drinker can turn the paper cups inside-out to more easily eat the alcoholic jello. 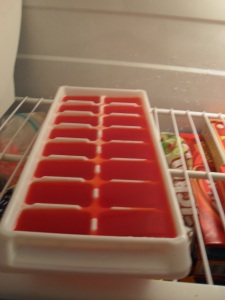 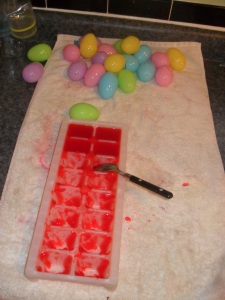 Originally I was going to put the jello shots directly in the Easter Eggs, but the eggs had a hole in them. I do not remember this from childhood. Does anyone else remember Easter Eggs with holes in them? So, I kept trying to put the jello mix in the Easter Eggs, but that FAILED. Unfortunately, the jello mixture kept running out. I tried to put parchment paper in, which I thought might stop the hole. That was also a ride on the Fail Boat. In frustration and fear, I started to Google. I was worried that the jello would set before I could pour it in a “mold.”

However, the Jello shots did start to melt and liquefy after being out for an hour or two (I was drunk and shooting water guns, I don’t have an exact time.) Michael suggested that I follow the “Jello Jigglers” recipe on the Jello box for jello shots, the next time I make this, which I have to agree with. To do that, you reduce the amount of cold water by 40%. So rather than using 16 oz of cold water and alcohol to use 10 oz for two packages of Jello. I’m not sure if you would need to reduce the amount of alcohol as well. These are things I’m going to try, and let you know.

The reason this drink recipe has 2 evaluations is because I wanted to review the recipe, but I had a few things to say unrelated to the recipe:

We all love Jello Shots. They’re really fun. However, I have never seen a recipe that uses Jello as a base for a cocktail. I think there’s an untapped “market” for jello as a fundamental base in cocktails. If mixed with alcohol the jello would stay as a liquid which could then be mixed. Also, I think that having a “Cosmopolitan” jello with alcohol as a desert can be really fantastic and fun. Because I have so much jello, I think I might try and start making jello cocktails.

Each recipe makes about 32 jello shots (estimating 1 oz per shot.)

As always, happy and safe drinking!

3 thoughts on “Easter Egg Jello Shots and a Watergun Battle!”

What are you looking for?